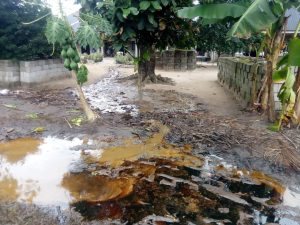 Bodo city is one of the many oil-bearing communities  in the Gokana local government area of Rivers State in the Niger Delta region of Nigeria. The community hosted about 96 oil wells, 1 flow station, and a manifold that controls the flow of oil on the Trans-Niger Pipeline (TNP) being operated by Shell Petroleum Development Company (SPDC). Apart from the oil wells belonging to Shell, there are other pipeline facilities owned by the Nigeria National Petroleum Corporation (NNPC) subsidiaries traversing the Bodo environment to the Bonny terminal for export. These pipelines have been the sources of the oil spill in Bodo and other Niger Delta communities. It is important to note that many of these oil pipelines were laid in the 1950s and since then, they have been in use carrying high-pressure crude oil on a daily basis for about six decades without maintenance.

On Sunday 31st July 2022 around 16h00, local farmers returning from their routine farming work as a means of livelihood noted a pike leakage spilling crude oil into people’s farmlands close to residential homes in the community. On Tuesday morning, 2nd August 2022, about 50 meters from the first spill site on the same 24 inches pipe was another outburst spill point, destroying crops as well as farmlands. Houses within the area were asked not to have any naked flames to avoid a fire outbreak, this has resulted in many families staying hungry or spending more than expected to feed outside their homes

The community immediately reported the incidents to relevant agencies of government and Shell Petroleum Development Company of Nigeria, SPDC (SHELL), operator of the said pipe, and a combined team of officials from Rivers State Ministry of Environment, National Oil Spill Detection and Response Agency (NOSDRA), Department of Petroleum Resources (DPR). The representative from SPDC (SHELL) arrived the spilled site on Wednesday 3rd August, 2022, in what appears to be a Joint Investigation Visit (JIV) to access the leaked points with a view to ascertain the cause and volume of spill, the extent of damage and area affected as well as properties destroyed.

On Thursday 11th August, 2022, Shell team leader Mr Gerald Onuigbo, presented a copy of the written Joint Investigation Visit (JIV) report to Community representatives for proof reading, approval and signing to pave the way for repairs on the leak points. The community however rejected the report describing it as subjective and having a biased presentation of facts.

The report claimed that the affected pipe have been abandoned since March 2022.  And that four (4) days before the spill, only water was passing through the pipe.

While the report acknowledged and admitted equipment failure, thereby holding SHELL responsible and accountable for the oil spill, the Bodo community has expressed doubt on claims that the pipes were carrying water at the time of the spill, dismissing such claims as a diversionary tactic strategy by the company to escape justice.

The community also accuses the officers from the Rivers State Ministry of Environment and representative of NOSDRA of compromising their positions to give SHELL a soft landing to the detriment of Community interests, hence their refusal to sign the document.

For the sake of community safety however, on Friday 12th August 2022, the JIV report was signed after heated engagements with Mr Gerald Onuigbo who is the head of JIV team, thus allowing SHELL to commence work on the first and second leaked pipe. Although SHELL had admitted liability for the spills, Community folks are very apprehensive about the genuineness and sincerity of the company to remediate the environment and pay adequate compensation for the already damage done. 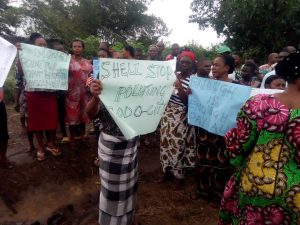 Community Members on a peaceful protest

On Wednesday, 24th August, 2022 another oil spill was noted on the same 24 inches pipe attracting no intervention by the government and the operators of the pipeline. This has pushed the community to daily street demonstrations and peaceful protests to call on both local and international human rights Campaigners and organisations to intervene for SHELL to do the needful. 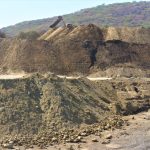